The Land of Make Believe with Old Man Ratchet 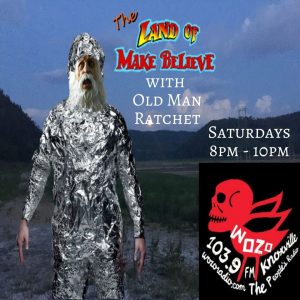 Who is Old Man Ratchet?

He’s someone who grew up listening to great radio. He was influenced at an early age by the legendary hip hop dj, Kenny K of 88.5 WMNF in Tampa, Florida. As a teen, he got to know many of the popular bay area disc jocks, often bumming rides to the stations to hang out during their shows. There are unsubstantiated rumors that he was involved in Tampa underground radio station 87x in the mid 90s.

Eventually he found his way to Knoxville, TN where again, according to legend and unsubstantiated rumors, he started a small pirate radio station. Asked on the subject he proclaims, “That’s not true! I knew about it of course, but from my understanding it was someone’s cat, Drexie Kaos, who started the station. After all, that’s who the feds sent the cease and desist letter to, …or so I’ve heard.”

Sometime after that station ceased to be, a local rag tag group of pirates took to the air. Broadcasting on 90.9 fm, they called themselves KFAR, Knoxville First Amendment Radio. Although Old Man Ratchet wasn’t personally involved in any way, shape or form, he was a huge fan of their diverse and eclectic programming. For 3 years Old Man Ratchet enthusiastically listened to the station until the fateful day the feds shut it down.

Sometime in 2005 Old Man Ratchet (at that time simply know as “Ratchet”) and his good friend, Dj Wigs approached Benny Smith at the local college station, WUTK, about starting a hip hop radio show. Thus The Edutainment Hip Hop Show was born. After a few years of hosting the show, Ratchet left the show to pursue his education in the mystic arts and cat herding. He passed the show off to good hands and it is still on air to this day.

When the FCC made the decision to create a new class of radio licenses for low powered community radio, Old Man Ratchet and a group of friends knew they had to go for it. After much paperwork, raising of funds, blood, sweat, tears, mistakes, arguments, and banging of heads against walls, WOZO was born. It is said that during the process, Old Man Ratchet himself along with friend Lowered Fader chose the call sign WOZO from a list of those available. Asked why they chose that one, he simply replies “It was the one that sounded right, it had a nice ring to it.”

The Land of Make Believe with Old Man Ratchet can be heard Saturday Nights from 8 to 10 pm. Old Man Ratchet likes all music but tends to play a lot of EDM, hip hop, trap, house, reggae and whatever else he’s feeling. He frequently mixes in samples from such notable chaotes as William S Burroughs and Robert Anton Wilson. It’s…it’s complete chaos.

Each show is posted in a downloadable mp3 format on Podcasts.com. You can also download and subscribe on iTunes .  Every once in awhole he goes live from his home studio on his Twitch channel. He also occasionally makes his show into videos that he post on his YouTube channel.

He would also very much appreciate it if you gave The Land of Make Believe Facebook Page a like.