General Strike has been part of WOZO from the earliest of the early days. On his Friday show he often takes on the persona of “Your Boy Friday” while pumping out EDM beats to get you in a party mood. On his Saturday show he sets off WOZO’s “Super Saturday” block of funky beats.

A man of little words on the mic, every once in awhile he gets riled up and lets his thoughts flow. Mostly he prefers to let the music do the talking for him. Expect the unexpected while tuning in.

Once again, his show is on Friday and Saturday nights from 6 to 8 pm. Make sure to give him a listen and his Facebook page a like. Listen to the General Strike radio promo here. 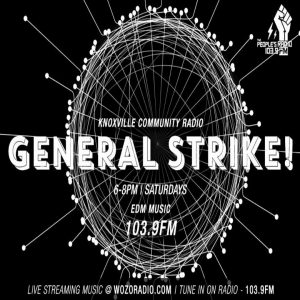